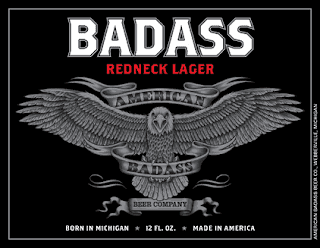 There's a fairly new beer on the market, and it's bad ass!  Yes, I'm talking about Kid Rock's beer, American Badass Beer.  In an interview with the Detroit News, Kid Rock said the following about his beer: "People that like premium beers and Guinness is their of choice, they will not like this. I want this to be like the beer I drink. You grab it, you share it with your friends, it's refreshing, it's cold, it gives you a good buzz. Done."  Described as an American lager, it doesn't have an after taste and it's priced right. Kid Rock wanted a great beer that should be bought without having to think twice.
Kid Rock was born and raised in Michigan, and he’s supporting Michigan and its businesses. He hired Michigan Brewing Company to brew his beer, and bring over 400 jobs to the area.  The 12- and 22-ounce bottles of the Badass brew are sold throughout Michigan, and eventually will be nationwide.
Let me know if you've tasted this beer, and what you think!
Email ThisBlogThis!Share to TwitterShare to FacebookShare to Pinterest
Labels: Booze